professionally about the event industry
News
Back to the news list 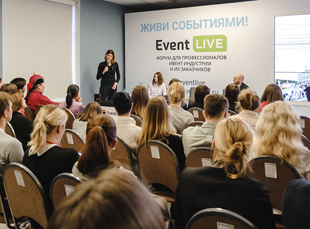 Annually in January Europe + Asia Event Forum (EFEA) and Forum Event LIVE for events industry professionals and their customers traditionally gather events industry professionals: organisers of exhibitions, forums and conferences, specialists in business and incentive tourism as well as specialized contractor organisations and customers from among the representatives of Russian and foreign business communities. Supported by the RF Chamber of Commerce and Industry, Russian Union of Exhibitions and Fairs (RUEF), St. Petersburg Convention Bureau, Expocenter JSC and over 90 partners Forums 2017 achieved new records.

The key topic of the EFEA and Forum Event 2017 business programme was “Event industry 4.0 reloaded”. This choice is assigned by the new reality – the world around changes extremely fast. IT innovations become a driver of development in all the human activities. We are on edge of the “generation 4.0” era when one takes the leading positions only if uses the new technologies efficiently. This idea was specifically underlined by Jochen Witt, president of the jwc Gmbh (Cologne, Germany): “Today human resources and right products are the main factors of competitiveness of the companies and events industry in general. One should just work and be proactive.” At the EFEA 2017 the participants defined what new conditions mean for the events industry, what future awaits it and how to become a leader on the market.

Number of sessions at the EFEA and Forum Event LIVE 2017 is another record of the events. Delegates took part in panel discussions, round tables, master classes dedicated to exhibition industry, meetings industry, venue management, industry-specific HR and education. Altogether there were 45 sessions for active discussion.

Apart from congress programme EFEA and Forum Event 2017 the delegates had an opportunity to take part in different formats represented on site - international contest for young events industry professionals Event TALENTS, independent EFEA Awards 2017 for events industry leaders and exhibition of technologies and suppliers of equipment and services Event EXPO.

EFEA Awards ceremony initiated by communication agency RESTEC MEDIA was held for the 3rd time.  According to the results of media monitoring, conducted by the informational and analytical company “Medialogy”, laureates were defined in five categories: Project of the Year (St. Petersburg International Economic Forum, SPIEF), Organiser of the Year Event of the Year (“Expocenter” JSC), Venue of the Year (VDNKh), Event of the Year (“Circle of Light” Festival), Discovery of the Year (Moscow Financial Forum).

Furthermore, for the first time the EFEA 2017 Organising Committee established a special nomination as a tribute to the late president of the RESTEC Group, Sergey Trofimov – “For a contribution to the development of the events industry in the name of Sergey Trofimov”. This award was given to the Russian Union of Exhibitions and Fairs (RUEF).

Also the EFEA 2017 Organising Committee initiated a special nomination “For a contribution to the development of the destination”. Laureates were chosen among new initiatives that were started in 2016 and had a great significance to regions’ promotion on the local and international market. St. Petersburg Convention Bureau and St. Petersburg Committee on Tourism Development won the award in this nomination for realization of the project “Fesival of Light” in the Nothern Capital of Russia.

The topic of the destination development and promotion was also discussed at the open meeting of the Russian and European convention bureaus (CBs) where experts talked over perspectives and opportunities if the CBS to contribute to the development of regions potential in terms of events industry. Also for the first time officially was announced the project “Russian Convention Bureau”. The national CB is to become a one-stop point in Russia for international events industry representatives, promote the country as a business-, events- and investment-friendly destination, support the national events industry and attract international business and cultural events to Russia.

Busy and intense congress and contest programme of the Forums for the 3rd time was enlarged by the exhibition of technologies and suppliers of equipment and services Event EXPO. Since 2014 the number of exponents has grown 4 times and this year in “PetroCongress” Congress Centre 20 exponents represented there services and projects.

Traditionally during the events, Matchmaking system was functioning, which made it possible to organise individual appointments, and provided an opportunity to establish direct contacts and arrange and strengthen business relations with event industry professionals. During three days of the Forums, 374 meetings were held that made another record of EFEA and Forum Event LIVE 2017.

Organising Committee has already started the preparation of the VII Europe + Asia Event Forum (EFEA) and III Forum Event LIVE that will be held on 24-26 January 2018 in St. Petesburg, Russia.

Welcome to the meeting point for the events industry in 2018!

Detailed information is available at the websites of the events: euras-forum.com | forum.event-live.ru